The outside fan is responsible for removing heat from the refrigerant so it can return as a cooled liquid to the inside unit and start the loop all over again. The outside “condenser fan” should be 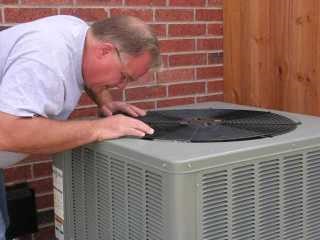 running any time the unit is cooling. You can go outside and check the fan in the condensing unit for proper operation when it’s running.

Be certain your thermostat is turned to the cooling position and the temperature is set low to bring the unit on. You should hear and feel air movement through the inside unit and duct in the house. (If not you may have a system-wide problem that is preventing both inside and outside units from working).

Once running, go to the outside condensing unit and check things out.  There are several possible conditions you can observe:

The cause of an overheated condenser unit could be from several causes. A defective fan motor is the most common. However, the problem could also be related to an electrical problem or even really low or lost refrigerant. Except for resetting tripped breakers, repairs will often require a qualified NATE technician.